On September 16, 1810, the Catholic priest Miguel Hidalgo y Costilla rang the bells of his church in Dolores, Guanajuato. A crowd of locals gathered around him on the front steps, and Hidalgo gave a passionate speech about the need for an independent Mexico, though today the exact words aren’t known.

Today, there are fiestas everywhere in Mexico to commemorate this symbolic beginning of the Mexican War of Independence against Spain. The end of the war finally came 11 long years later in 1821.

Hidalgo’s grito (cry, shout) is reenacted throughout Mexico on September 15, the night before the holiday, usually at 11 p.m. The most important available government official rings the bell that hangs from the front of the government palace in nearly every city and town. People fill the zocalo, the center square fronted by government buildings and the cathedral. They dance to live music, waiting for the mayor, governor or president to hang out the window, pull the cord for the bell, and give the grito. This is followed by cheers of ¡Viva México! from the crowd.

This is Mexican Independence day, not Cinco de Mayo. Cinco de Mayo was a victory against the French in the city of Puebla in 1862, though it’s better known in the U.S. as a good day to shove a lemon down the neck of your Corona, do tequila shots, and eat tacos.

(By the way, in Mexico, they squeeze a lime into the beer, not a lemon, and never stick it down the neck. It’s like when Mexicans put ketchup on pizza – it just ain’t right.)

If a Mexican family doesn’t go to the zocalo to watch the grito on September 15, they may host or go to a noche mexicana (Mexican night), a party where they listen to Mexican music, eat traditional food (antojitos mexicanos) and maybe dress up in traditional clothing.

It’s a big holiday in Mexico, and everyone has the day off on the 16th. Some fortunate folks – government workers like me – get more days off for a long weekend.

For weeks before, you can buy party favors on the street: flags, sombreros, fake moustaches – stuff like that. You don’t need to buy fireworks – the city will have plenty of those, along with bands, food and drink. It all depends on where you are.

There will be a big stage set up in the zocalo and a few bands. In big cities, or when especially popular bands are scheduled to play, people might get there in the afternoon before it gets too crowded. In Mexico City, where the president gives the grito from the executive building on the zocalo, there are outdoor parties in other parts of the city as well.

After the grito you can expect big fireworks, and then more music. 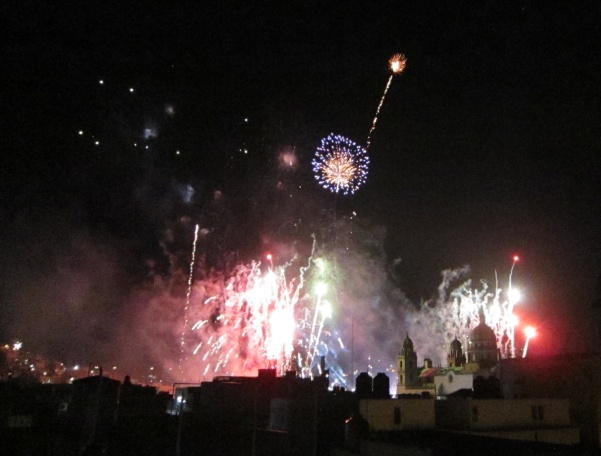 I’ve been to the zocalo on September 15 a few times in Toluca, where I live. Among others, I’ve seen classic groups like Los Angeles Azules, Los Tucanes del Norte, Pepe Aguilar, Banda el Recodo, and the comedian Adrian Uribe, better known as “El Vitor.” He’s the host of the Mexican naco version of Family Fued, 100 Mexicanos Dijieron.

In a small town with a close community, the party might be more like a huge potluck. Everyone stocks up on disposable plates and utensils, and they bring lots of food. The food might come out of a big tupperware container, or it might be grilled up right there. You’ll eat tacos, pozole, pambasos, tostadas, and much more. There’s also plenty of tequila, dancing and patiotism. Once in Temoaya, in the State of Mexico, they brought out a original copy of the Mexican declaration of independence:

Elsewhere, a fun thing after the grito is for the kids to spray everyone with silly string or sticky powder in a can. I’ve seen this after soccer victories too. This sleepy girl and her family are selling eggs full of powder and confetti to throw at people:

The party goes on, before and after the grito. If small towns don’t have a stage set up for live bands, they at least have an extra loud DJ: 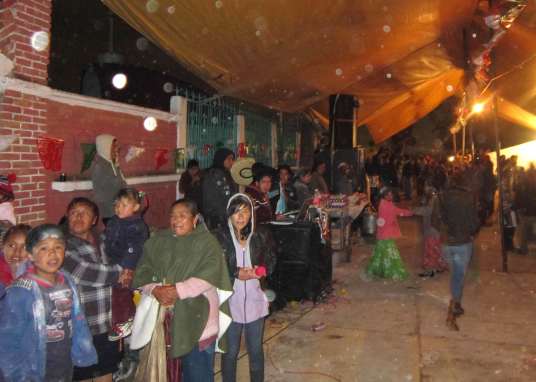 The queen of the party:

On the beach, etc.

I’ve never been to a beach on September 15 or 16. I get a few days off work, but so does everyone else, so it’s not the ideal time to travel.

Another common event during this long weekend is a charro show, like a rodeo, a great time to put back a few beers and admire Mexican cowboys.

Mexico is a big, diverse country with regional cultural differences in every corner. It’s a bad country for generalizations. I’m just describing what I’ve seen here in the center of the country. Each region has at least one thing in common, however: a deep, colorful, musical, delicious culture.

If you’ve been to a different sort of Mexican Independence party, please tell me about it below.