Jambands in the Yucatan, 2017: Ideas and Advice

The word got out: The Mayan Riviera is an awesome place for multi-night concerts at all-inclusive resorts. Widespread Panic has played the Hard Rock Resort five times already; Phish is coming back for a second time, perhaps starting a tradition; and early next year you can add two members of the Grateful Dead to the list of jamband luminaries throwing a party on the warm beaches of the Mexican Caribbean coast.

These three- or four-day events, played by bands that don’t repeat songs from night to night (just in case you aren’t familiar with jambands), sell out pretty quickly, and they aren’t cheap, that’s for sure. Other bands may or may not be on the bill; My Morning Jacket’s One Big Holiday has Gary Clark Jr., among others, while Phish is the only band performing at their second Mayan Riviera fiesta, which is the norm for Phish festivals.

If you’re coming, then a clearly-marked shuttle bus will pick you up at the Cancun airport and take you straight to your hotel. Hard Rock, Barceló, and the rest are enormous vacation villages with pristine beachfronts, big swimming pools, and all-you-can-eat-and-drink restaurants and bars. You could never leave the resort and still have a great time.

If you do want to leave, however, these resorts are surrounded by the beautiful natural areas and wild party towns of the Mayan Riviera. Most resorts (Hard Rock, Barceló) are between Playa del Carmen to the north and the seaside Mayan ruins of Tulum to the south.

Getting Around the Mayan Riviera

Your resort should have a shuttle to take you where you want to go (maybe free, probably not). If you don’t mind paying a little more money, you could ask the front desk to call a taxi, although public transportation is cheap and easy to use.

Simply walk out the front gates to the highway, make sure you’re on the correct side of the road, and wave down any passing bus or white passenger van (called colectivos). Not all will stop, but when one does, tell the driver your destination and watch for signs so you’ll know when to get off. Colectivos are cheap: most trips will be around 30 or 40 pesos, which with a favorable exchange rate is between one and two U.S. dollars.

Don’t take a tour to Tulum. Go on your own. Leave early and hop on a colectivo. That way you can avoid the crowds and take your time swimming under the ruins at one of the most beautiful beaches in the world, certainly in Mexico, which often appears on “Top X Beaches” lists.

The colectivos going south first pass the Tulum ruins and then enter Tulum town down the road. The town has some good restaurants and a pleasant atmosphere, but not much else, and it’s far from the beach. To get to big, beautiful Tulum beach (not the little one under the ruins), walk 15 or 20 minutes through the jungle from the Tulum ruins.

Colectivos going north will take you to Playa del Carmen. (From there it’s an easy transfer for Cancun.) In Playa, the area where the colectivos stop is two blocks from Quinta Ave (5th Ave.), the main pedestrian street full of bars and restaurants that follows the beach. Come here after the shows to party ’til sunrise.

Downtown Cancun isn’t too exciting, but it has some interesting markets and nice parks. To go to the beach in Cancun, take a local bus to the Hotel Zone (Zona Hotelera), which is a long, thin island of white-sand beach and big resorts.

Another nice day trip from Cancun is to Isla Mujeres, where laid-back beaches with views of the mainland await. Ferries leave from two terminals in Puerto Juárez just north of downtown Cancun (take a taxi), or there’s a more expensive ferry from the Hotel Zone.

Shorter colectivo rides from the resorts can take you to less developed beaches (Xpu-Ha is the closest and just south of the Barcelo) and cenotes, the underground caves and sinkholes with fresh, clear water for swimming or scuba diving. 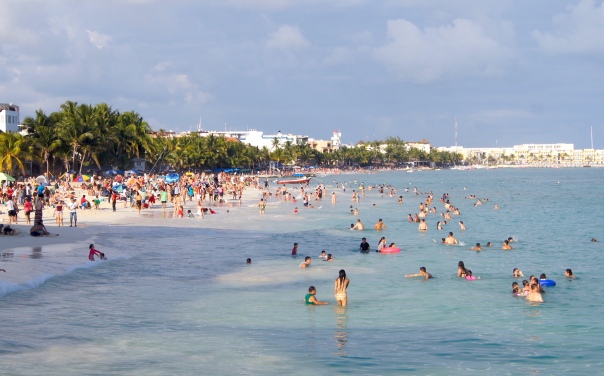 If you’re staying at the Barcelo, there are four cenote parks right across the street, including Cenote Cristiliano and Cenote Azul, the two closest ones. Just walk out the front gates and cross the street. They are much cheaper (100 to 200 pesos) than the big adventure parks advertised everywhere with funny names like Xel-Ha and Xcaret.

These huge adventure parks have ziplines, beaches, and cenotes, along with big buffets and shows. The resorts will offer to sell you a ticket and take you there, but be sure to compare with the prices on their websites and then take a colectivo. They’re cool places, but I think you’d have more fun and a more authentic experience at one of the lower-key cenotes nearby. I mean, you already have a buffet, right?

Well, sorry to burst your bubble of enthusiasm, but my first piece of advice is don’t do it, especially if you don’t speak Spanish. Although Mexican law states that all beaches are public land and therefore must be accessible to everyone, these resorts don’t seem to respect the rules, as their beaches are isolated and surrounded by jungle and rocky terrain. Yes, there’s crocs in them streams (not their Floridian second cousin the alligator), and the resorts are heavily fortified compounds with tight security.

If you’re determined to sneak in, however, I have another piece of advice for you: Offer no resistance to the security officers if you get caught. Don’t try to run past them and don’t bother attempting to talk your way out of it. Unless you’re prepared to offer a bribe (which they may take and still not let you in), do what they say and leave immediately.

In Mexico, especially as a tourist, you have zero rights. Although the security officers probably won’t rob you or beat you up—this part of Mexico has too many foreign visitors for that—they could easily have you arrested and thrown in jail. In fact, I heard that a few people went to jail for trying to sneak into Phish last year.

Again, despite beaches being public land, in practice you can’t really argue the finer points of Mexican law with six angry security guards tapping the guns and handcuffs on their belts.

Just save your money and go another time. It’s not like Phish, Widespread Panic and the rest don’t play your hometown or darn close to it at least once a year anyway. (Unlike poor me living in B.F.E. Mexico—but I did make it to Dick’s last year.) 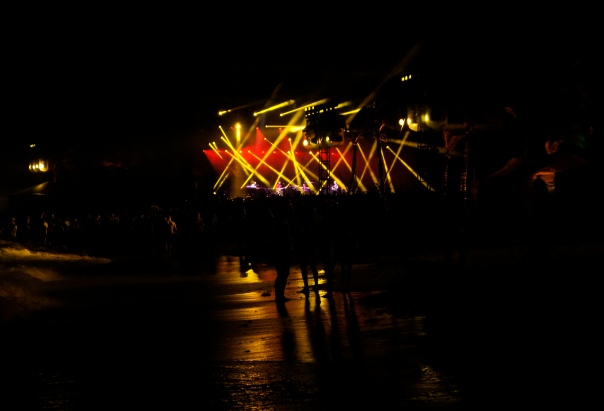 This brings me to a common complaint about these shows: too expensive. For sure it would be awesome if Phish played a big festival in Mexico with regularly-priced tickets, like Vive Latino in Mexico City or Cumbre Tajin in Veracruz. (I saw Tool, Primus, Jack Johnson, and more at Cumbre Tajin a couple years ago, by the way.) Phish has very few fans in Mexico, and if they played a festival like one of those, they would instantly create tens of thousands.

But these festivals are in the middle of the country. I imagine that Phish and the other bands want to play shows in Mexico because they want to play next to the ocean, with palm trees swaying and the breeze breezing. Trey wouldn’t have written “Breath and Burning” otherwise.

Sure, these resorts are expensive—they’re expensive even without a popular foreign band playing there. And think about it, when Phish comes to play, it’s not just the dudes in the band and a few guitars, but planeloads of gear. I mean, last year they had so many lights, including big ones over the ocean, that they had to bring in a second lightman, the guy from Umphrey’s Mcgee. 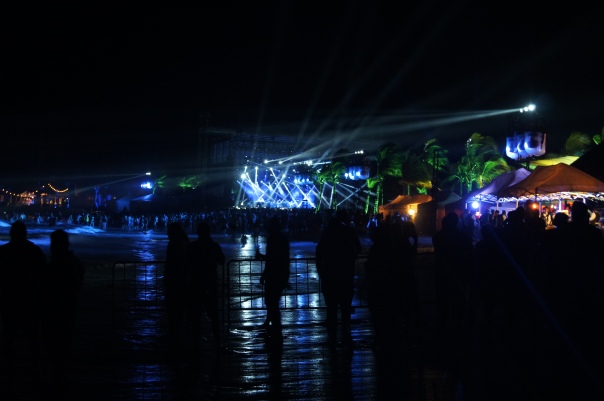 So of course these resort shows aren’t cheap. What do you expect? That the bands would find some empty beach nearby and set up everything themselves, and their massive fanbase (most of whom don’t speak Spanish) would find their own hotels and transportation to the shows? Sure, it’s possible, by why go through the headache, especially when plenty of fans don’t mind paying and look forward to eating whatever they want and drinking top-shelf tequila all morning, day, and night long.

Whatever the price, the shows are happening and will keep on happening. I won’t be going to any this year (too expensive for my Mexican university teacher’s salary, especially with the terrible exchange rates for the peso), but those who do, you’ll for sure have a great time.

My Morning Jacket (with Gary Clark Jr., among other guests): http://mmjonebigholiday.com

The Avett Brothers  (with Jason Isbell, among other guests): http://avettsatthebeach.com

One last piece of advice. If you can, spend a few more days in Playa del Carmen before or after the shows. You’ve already paid for the plane ticket, hotels and restaurants are cheap, the place is awesome, and there’s a even a huge electronic music festival—the BPM Festival—in the clubs and beaches from January 6-15. Even if you don’t like EDM, the scene is wild.

In Playa you can find decent hotels a block or two from the beach for as low as $20 or $30 USD a night. The Mexican peso is low and getting lower against the U.S. dollar, meaning automatic discounts on everything. You can chill in Playa and have an excellent base for visiting all the places you didn’t visit because you were too busy getting shwilly in the Barcelo pool, like the ancient Mayan city of Chichen Itza.

(Chichen Itza is too far for a day trip anyway, at least without a rental car and a really early start. Don’t take a tour to Chichen Itza—go by yourself when you have a free day. On the tours you spend more time on the bus than at the ruins, and you get herded around like kindergarteners on a field trip. The best way to see it is to stay in the colonial town Valladolid the night before.)

Shameless plug: I wrote a guide to the region that describes all of these places in detail. You’ll save its low price the first time you follow my advice for a hotel, restaurant, bus or colectivo. (And I’ll spend the money I make on the guide in NYC for the Baker’s Dozen, thank you very much.)

Please click on the book below or the link for more information. If you just have a quick question, I’ll be happy to answer it in the comments.